It’s strange.  I slept late and when my alarm went at 4:30am this morning, I jumped out of bed and was energised, I’m coming home!

I usually sleep earlier, and get up later, and struggle to get out of bed.

It must be the excitement.

My flight is scheduled to depart at 12:30pm, so I’m sitting at Salon Hibiscus, eating, drinking, and writing.  However, I can’t eat as much I would like to, because I had enough time this morning to have breakfast, and I also packed snacks for the ride to the airport.  This time, the van could seat 9 people, and there were 8 people including the driver (rather than having a 50 seater bus to myself like last time!).  Fortunately, I was in the front with the driver, so I had a lot of space!  The reason I sat at the front was because when I got to the van, there was another guy seated at the door and I didn’t want to ask him to move, so I sat at the front

It’s boarding time soon, so I better post this before I pack up.

Here’s some quick photos from the week.

A crunchy green peach from Mathias.  It was sour, but also very sweet

Glimpse of slag tapping between the buildings.

I helped someone move to another office.

The power went out… 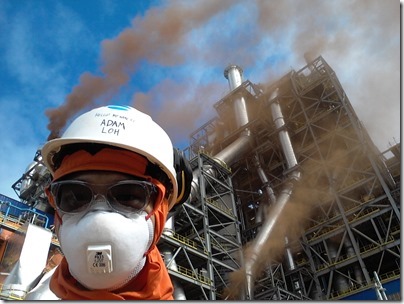 Liam and Ray at the favourite concrete block waiting to go to lunch. 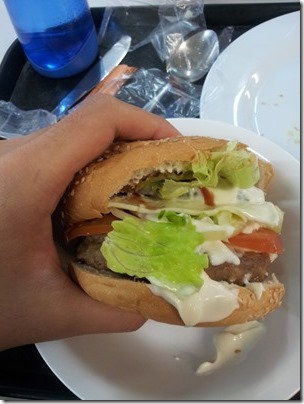 Friday lunch at the Chinese canteen.

Ray is running (the Chinese in us).

and here I am.