Went to the Chinese canteen for lunch today with Ray and Liam (who blends in well). 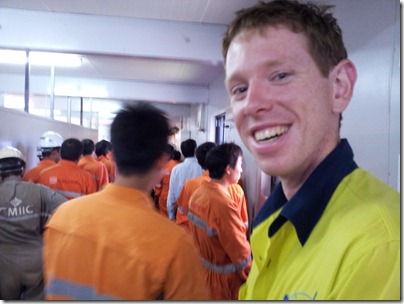 The food was alright!  At first, there were no oranges, so no juicing. But later, after we finished eating… the oranges came out, and then we started juicing!

Later in the office, saw a German colleague with a car magazine, he passed it to me to read,  but I don’t know when I’ll get a chance to look through at pictures, as it’s all in German and there’s so many other things to do.  A new 4 series!

Other good news: I received an email from the strata company. The lift at my apartment is finally fixed.  I emailed them on the 3rd of August 2011 about the lift being out of service, and today, the 6th of November 2012, it is back in service.  More than a year.  Ridiculous!  The fight against the builder is still on!

Going to dinner and then French class now…  See you later!